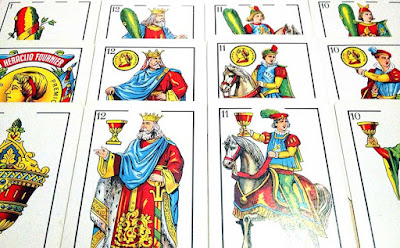 
A euphemism is a nicer way of saying something.

"Passed away" sounds nicer than "died." That's a euphemism.

In traditional Chamorro culture, one doesn't come straight out and talk about sex. One finds ways to talk about it between the lines, around the bush. Hinting, suggesting.

There are many ways to do this. But the other day an older lady showed me one more way.

We were sitting across each other at a party and next to me was her older brother. Both, by the way, are in their 80s.

The lady started telling me about her brother, who was in his own world eating his food. He's hard of hearing anyway.

She was saying how he, a widower, met this younger lady "pues pumanggengge i dos unos kuåntos meses." The two "played panggengge for some months."

So, literally, she said her brother and the younger lady played a card game, but the hidden meaning was not so hidden.
Posted by paleric at 11:10 AM