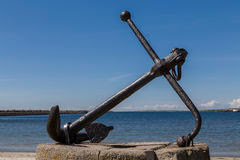 Apparently, according to news accounts, one of the two was found around 1829 by a whaling vessel stopping at Tinian. When the whaling ship lowered its anchor, it touched Anson's old anchor resting at the bottom. The anchor was taken down to Guam, rusty but in usable condition, where it was banged by Chamorro workers into bars and bolts, since someone was building a ship and needed those parts.

Well, if this makes you sad, hold on.

History-minded persons in Saipan took advantage of a Scripps Institute research team doing some exploration in the very area offshore in Tinian where Anson's ship was anchored. They asked the researchers to keep an eye out for anchors, and they did in fact find two. In 2017, these two anchors were brought up. They very well could be Anson's two anchors, but the jury is still out on that until we can be more sure.
Posted by paleric at 9:28 AM