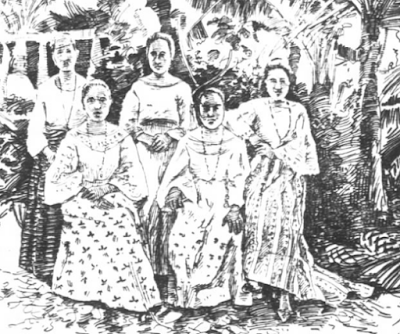 
Based on an American visitor to Guam's description of a wedding feast he attended in 1895 or 1896.

The daughter of Félix, one of the richest men on Guam, is going to get married and Félix does nothing half-hearted. It is to be a grand feast.

The chubby father of the bride greets you with a handshake at his home. Crates of beer and claret wine are being brought in, as women in the rear of the house bake in an outside oven (hotno). They smile and wish you a "buenos dias." Young boys are tending an outside fire meant to roast a pig. A neighbor brings in bananas (aga') and oranges (kåhet) as a gift. On the floor, to the side, lay a big pile of yams and taro (dågo and suni). An old woman is grinding cacao, which was often made into chocolate for drinking.

Later that night, you walk to the groom's house which you easily identify among the neighboring homes because of the noise of the fiddle and accordion. There, the groom is having his own party. The Chamorros all know how to dance the waltz (båtso) and the Virginia reel. Margarita, a member of the family, escorts you by the arm into the party. On one table one finds various breads, tropical jellies, fruits, cakes, chicken, meat and fish.


On another table are wine, beer, gin and tuba (coconut toddy). Our American visitor is introduced to the groom's sister, who agrees to dance with him, her black eyes alive with excitement. After the dance, he must drink wine with her. In comes the groom, named Juan, accompanied by his male friends, who all tease him about the troubles of married life he is about the enter. In the corner is the groom's mother, puffing away at her cigar, made from local tobacco. He asks her for a dance, old as she is, to which she gives a curious look. Are you joking? But when she gets up to dance, she proves she's not as old as she looks. 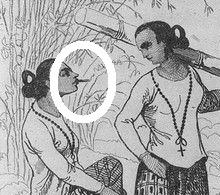 All throughout the 1800s, visitors described how Chamorro women loved smoking cigars


The American now goes to the bride's party. Her father Félix owns a piano, which is being put to good use for the evening. In a prominent chair sits the bride's mother Guadalupe, and some plump, older ladies sit in their own chairs nearby, making remarks about this or that lady's attire. The bride is twirling on the dance floor with a Spanish officer. The Spanish officers go to all the parties, whether they are invited or not.

If you tire of dancing, there are always games of chance at these parties. And if you get bored at one party, you go the second one. Neither party will end soon, anyway. These parties go on till just before the sun rises.

Although the newspaper article does not give last names, even first names are enough of a clue.

When the writer said that Félix was one of the richest men on the island, and that his wife was named Guadalupe, that was enough for me to think of Félix Díaz Torres and his wife Guadalupe Crisóstomo Martínez. Félix was one of the manakkilo' (high status) Torreses. His brother Luís, for example, was a Manila-educated teacher and government official. Another brother, Juan, was island treasurer under American Governor Leary.

Félix and Guadalupe did have a daughter Josefa who married a Juan, Juan Anderson Millinchamp.

I'd put my last dollar that this American visitor had been a guest at the wedding parties of Juan Anderson Millinchamp and Josefa Martínez Torres.

Félix Díaz Torres
Posted by paleric at 8:43 AM