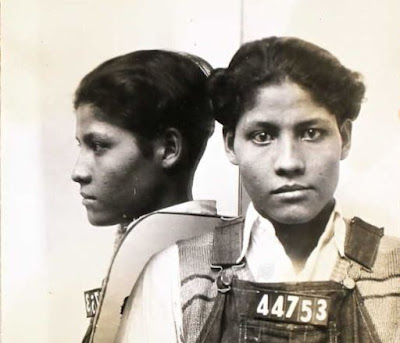 
There's not much to this story, sad as it is. But it's not often we can look into the eyes in a photograph of a Chamorro born over 100 years ago.

Miguel Garrido, like many young Chamorro men, left Guam on a ship in search of a better life, so they believed. Many of them did settle down elsewhere and did well for themselves. Not all of them did.

Miguel, it seems, arrived in San Francisco from Manila in 1926. At least one Miguel Garrido from Guam, born in 1907, appears on a passenger list that year.

It didn't take long, however, for Miguel to find himself in trouble. Just the following year, he was arrested and charged with rape. He was found guilty and sentenced up to 50 years. In January 1928 he entered the gates of San Quentin Prison. He stood 5 foot seven and weighed 133 pounds. He was 20 years old, so born in 1907 as mentioned before.

There was a Miguel Garrido born in Guam in 1907. His full name was Miguel Sablan Garrido, the son of José Garrido and María Agüero Sablan.

He and his family appear in the 1920 Guam census as living in Malesso'. His mother had passed away already. He was only 13 years old and without a mother.