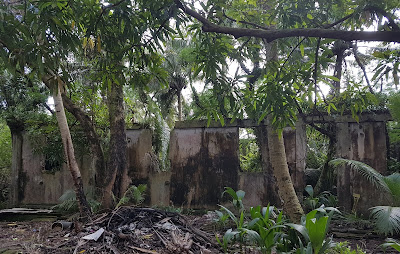 Much of Guam's history is hidden right in front of our eyes.

We pass these sites all the time and are not aware of the history, or that they even exist. Just turn a corner we normally ignore; venture just a few steps more, and we're facing a piece of island history.

Take for example the Japanese rice mill in Malesso'. It's not terribly difficult to see, but it is off the main road. It sits on private land, so one has to ask permission of at least the neighbor through whose land one must pass. The barking dogs will make you do that, anyway. 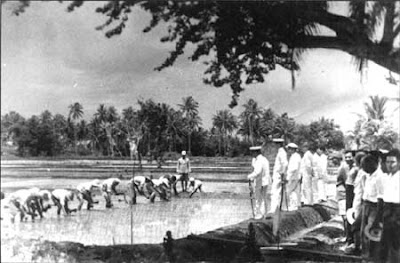 When the Japanese occupied Guam, from December 1941 till July 1944, both the Chamorros and the Japanese turned to the land and sea for food. Some food continued to be imported from off-island, but in ever-decreasing amounts due to shortages and the dangers of American attacks.

In 1943, the Japanese government made self-reliance in food the absolute rule on Guam. Even more so for the Japanese than for the Chamorros, who were quite happy with corn and other carbohydrates, rice production was a top priority. Paddies were started typically in the southern half of the island where low-lying, watery areas, often crossed by rivers and streams, made rice growing ideal.

In December of 1943, a rice mill was built by the Japanese in Malesso'. It consisted of two, non-adjoining rooms. Rice paddies may have surrounded the area, which is low-lying, not far from the beach. Though no documentation exists, that we know of, to prove it was a rice mill, this is what some local residents alive during the Occupation say it was. 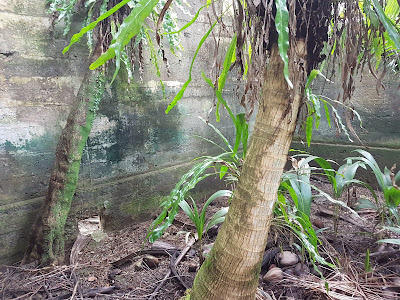 The mill was not in use for long, though, if at all. First of all, rice production was more or less a failure on Guam during the Japanese Occupation, for several reasons. Harvests were poor and could not adequately feed the Japanese military on Guam, especially when their numbers increased in 1944 in anticipation of the American invasion.

By March of 1944 or so, just four months after the mill was built, preparation for all-out battle with the Americans took precedence and farming took a back seat, especially when the Japanese rounded up the Chamorros to wait out the battle in the interior hills and jungles.

Today, the roof and interior floor of the mill are gone. Inside the building, vegetative and man-made debris litter the area. All around the mill, the same conditions exist. Yet, despite typhoons and earthquakes, the four concrete walls of the mill are still standing, more than 70 years later.

It is the only non-military Japanese-built structure surviving on Guam from the Occupation.
Posted by paleric at 11:04 AM