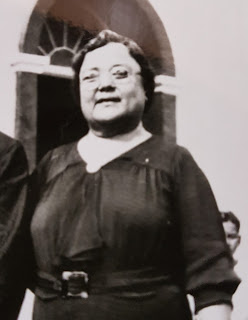 
Ana Pangelinan Martínez, who married the American former Marine James H. Underwood, was one of the most prominent Chamorro women on Guam in the first half of the 20th century.

Her husband was the U.S. Postmaster on Guam for many years, and her brother, Pedro Pangelinan Martínez, was a successful businessman. She lived at the center of Guam's social life, with one foot in the elite Chamorro world and the other foot in the U.S. Navy officers' social circle. She was thus involved in many events and affairs of the island. But she found one of her greatest opportunities to contribute to the community through the Church. She was close to the Spanish Capuchin missionaries and she was in charge of the religious education program at the Hagåtña Cathedral, educating hundreds of children every day after public school got out around lunch time. She was responsible for assigning the teachers to their respective classes.

Thus, Tan Ana was well-known among all classes of people, from her contemporaries down to the little children, since she took a very public role in the Church, to which 98% of the Chamorro people of Guam belonged.

It isn't any surprise, then, that a little children's song was composed which included her name. God knows who wrote the words, but everyone knew Tan Ana and she found a place in the song. As are many children's songs, it's playful.

Keep in mind that most Chamorros in those days pronounced Underwood AN - DA - UT (OOT).

In a court document, James Underwood is referred to as "Santiago Andaut," "Santiago" being "James" in Spanish and "Andaut" the Chamorro way of pronouncing "Underwood."


Dingaling doll, its dress of blue.
Who sewed it for you? Tan Ana'n Underwood!