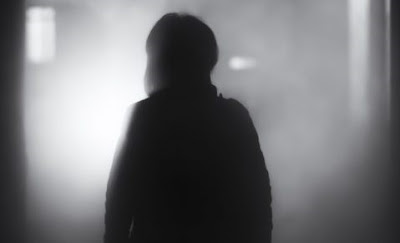 In traditional Chamorro belief, the dead are never really gone.

Their bodies may be gone, but their spirits are ever among us; unseen by us, they see us all the time. But, once in a while, they make their presence known and perhaps even seen, heard or smelled.

The man had just married his bride. Because the bride was the only surviving daughter of her mother Rufina (a sister, Ana, had passed away in her young adulthood), bride and groom moved into Rufina's house. That way, the young bride could still look after her widowed mother, and also care for her dead sister's young child. The groom, too, had lost a parent. His mother had died when he was just a young child.

One night, when husband and wife were walking home in Hagåtña, the man sensed a presence behind him.


Tumalak tatte yo' sa' hu siente na guaha ga'lågo ni tumattitiye ham.
(I looked back because I was feeling that a dog was following behind us.)

Annai humålom ham gi gima' i sogrå-ko, humånao ham hulo' gi segundo piso.
(When we entered the home of my mother-in-law, we went up to the second floor.)

In hingok na ma baba i grifo gi halom båño. Annai in baba i pettan i båño,
(We heard the bathroom faucet turn on. When we opened the bathroom door,)

tåya' taotao! Ya ma huchom esta i grifo!
(there was no one! And the faucet was turned off!)

Sigiente dia gi pupuenge, annai in bira ham gi gima' sogrå-ko,
(The next day at night, when we returned to my mother-in-law's house,)

in li'e' na mañiñila' i kandet sanhiyong, ni fihu in pino' an esta gespainge.
(we saw that the outside light was on, which we usually turn off when it is late at night.)

Hu tungo' na guaha håfa ha susede i sogrå-ko.
(I knew that my mother-in-law experienced something.)

Annai in baba i petta, in hingok na kumåkånta i sogrå-ko "Abe Maria."
(When we opened the door, we heard my mother-in-law singing "Ave Maria.")

Hu siente na guaha taotao umåsson gi fi'on-ho gi kamå-ho.
(I felt that someone lied down next to me on my bed.)

Kahulo' yo' ya hu baba i petta lao tåya' taotao. Pine'lo-ko na era hågo ya hu essalao i na'ån-mo.
(I got up and opened the door but there was no one. I thought it was you and shouted your name.)

Annai humåme ha' yan i asaguå-ho, ilek-ña i asaguå-ho,
(When it was just me and my wife, my wife said,)

Since Ana was not physically present at such a special occasion as her sister's wedding, they believed Ana was trying to somehow be there in the way she could. The same could be said for the man, who thought that the sensation of a dog following them at night was his deceased mother, also physically absent on his wedding day.
Posted by paleric at 12:40 PM