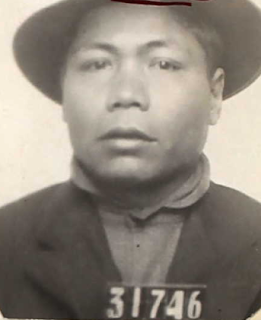 Juan Crisostomo left Guam with 13 other young men in 1902 for San Francisco, California.

According to records upon his arrival, he had no job waiting for him in San Francisco, nor relatives to pick him up. More than likely, the 14 Chamorro men on the journey stuck together, or at least in smaller groups, for a while until they went their separate ways finding work and lodging.

Juan had $10 in his pocket when he landed in San Francisco. In the US, he also went by the name of John.

Unfortunately, Juan was arrested in San Mateo, California (not far from San Francisco) in 1918 and charged with manslaughter. This usually means that someone killed another with either no intention of killing, or in the heat of the moment. It is a less serious offense than murder.

He was found guilty and sentenced to no more than 10 years at San Quentin prison.

He must have gotten sick, as he died in prison in 1921 while still serving his sentence. RIP
Posted by paleric at 9:00 AM