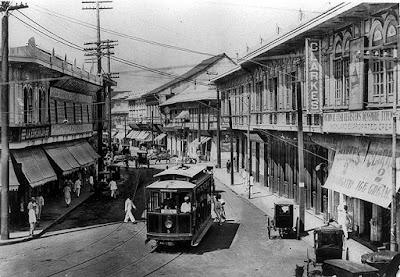 
How times have changed.

Generally speaking, most Chamorros today would never consider working as a domestic servant.

But, in times past, many Chamorros were just that. And not just to foreigners, either. Many Chamorros worked as domestic servants for other Chamorros. The male servants were called muchåcho and the female muchåcha, words borrowed from Spanish for "boy" and "girl."

One indication how Chamorro attitudes about domestic service changed over time is the connotation those two words took on. The words muchåcho and muchåcha were considered too negative, especially if said in front of the servants, that people would called them lahi-ho or hagå-ho, "my son" or "my daughter," instead.

Working as a domestic servant had its advantages. Usually there was payment in cash, something more people came in contact with under the Americans but to which not all had access. Sometimes the employer would buy the servant work clothes. Servants could eat what was available in the house (later, of course). In general, by being in the home, office or environment of the boss, the servant could benefit from that environment.

When you worked for someone more affluent, who traveled abroad, you could, too!

In 1921, the Governor of Guam, Captain Ivan C. Wettengel, and his wife, wanted to travel to Manila. Accompanying them was First Sergeant Otto Cox, in the Marines but soon to retire. Cox was accompanied by his Chamorro wife, the former Dolores Borja of Sumay. With a bigger group of military and civilian passengers, they boarded the Army transport ship the USAT Thomas, which frequently stopped by Guam on its Pacific journeys. 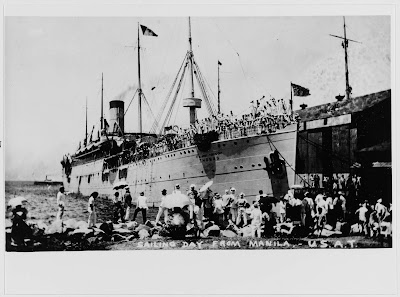 The USAT Thomas docked in Manila in the 1920s


But the Wettengels and Coxes also brought their Chamorro domestic servants with them on the ship to Manila.

The maid of Mrs Wettengel, the Governor's wife, was Mrs. Juana Cruz. It's a common name, so I can't say which Juana Cruz she was in 1921.

The servant of Otto Cox was Miss T.A. Charfauros. I do not know what T stands for. Tomasa? Teresa? Teodora? Or the other dozen or so possibilities. I've looked through the 1920 Guam census for a single woman named Charfauros with a first name beginning with T.  I can't find one.

I can imagine Juana being told, "Pack our bags, Juana. We're going to Manila!"


Besides these Chamorro servants, Gaily Roberto Kamminga, and a Chamorro Navy man, Enrique R. Quitugua, were also sailing to Manila.

Juana Cruz and TA Charfauros were not the first, nor the last, Chamorro domestic servants to travel abroad, thanks to their employment. A former Spanish Governor of the Marianas and his wife even took their Chamorro maid with them back to Spain, where she lived and died.