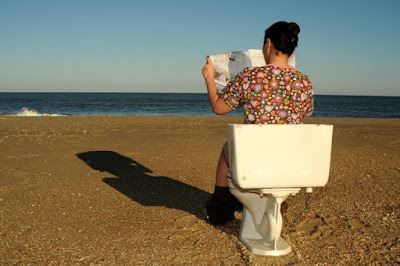 Well, if you really want to know a bit of island life over a hundred years ago, here it is.

The facts of this story come from court records written in 1902.

But....in some places, you could relieve yourself outdoors, right onto the land. The problem was, if you did so too close to someone's home, there was bound to be a quarrel.

This is indeed what happened one Saturday in 1902 in the seaside village of Tepungan, located in between Asan and Piti. Some homes there were located not far from the beach, just yards away from the sand. One such home belonged to Vicenta Terlaje Quidachay. She looked out her home to see her neighbor's son, José Megofña Salas, defecating openly in the area between their houses, with his mother Ana Pérez Megofña standing nearby.

Vicenta threw a stone at them and cried out, "Håfa na masisinek gue' guennao?!?" "Why is he defecating there?!?"

Defending her son, Ana replied "Ya amåno mås malago'-mo para u masinek?" "And where else do you want him to defecate?"

Now it turned into an ugly verbal tirade of insults.

José then said, "Åsson ya un baba i pachot-mo ya bai cho'gue guennao!" "Lie down and open your mouth and I'll do it there!"

Vicenta retorted, "Cho'gue gi as nanå-mo!" "Do it on your mother!"

Then, another son of Ana, Ignacio, came in from the beach and heard what was going on. He, too, joined the fight, calling Vicenta every cuss word he knew.

Despite the fact that all four of these individuals hurled vulgar insults at each other, it was only Ignacio whom Vicenta took to court. Since he openly admitted he had said those things, the court found Ignacio guilty of verbal abuse and fined him.
Posted by paleric at 9:49 AM