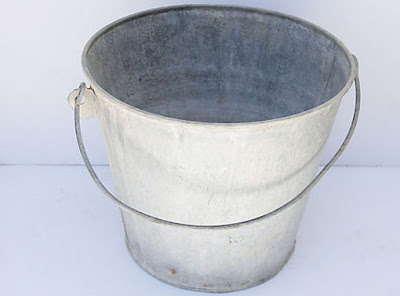 
Zinc was all the rage in the Marianas in the late 1800s. Called sin in Chamorro, using the Spanish word for "zinc," "cinc" or "zinc." It was used for roofing on select government and church buildings, and on the homes of the rare wealthy families. Japanese merchants in the Marianas, on the rise since the 1890s, helped bring in more zinc products. The Hagåtña store keeper Yoshinori Seimiya was one such Japanese supplier of zinc merchandise.

Josefa Torres de Borja bought a zinc pail from Seimiya in the early 1900s. She then gave it to Rita Aguon Watkins, the wife of Calixto (sometimes Calistro) Torres Taitano. One day, Rita left the pail at the hotno (oven) of Justo de León Guerrero at his house in Hagåtña. She intended to get water from Justo's well, but got busy with baking bread. She decided to send one of her children later to get the pail, but they discovered that it was gone.


Rita then saw Catalina Aguon walking with the pail in hand. Catalina was on her way to fetch water at Justo's well. Rita followed and snatched the pail from Catalina, stating that it was hers.

The matter went to court!

The court awarded the pail to Rita.

On a side note, when aluminum was introduced to the Marianas, it looked like zinc so Chamorros called aluminum sin, as well.

A river flowed through Hagåtña, but people didn't drink from it. People did their laundry and other washing in the river. At least they didn't (normally) go to the bathroom in it.

There were at least three different ways to get drinking water. One was to catch rain from the roof tops. One common way to do that was to put big clay pots called tinåha underneath the roof and the rain water would fall into them.

A second way was to transport fresh water from the spring in Didigue or from the river in Fonte. But that necessitated bringing an animal-lead cart. 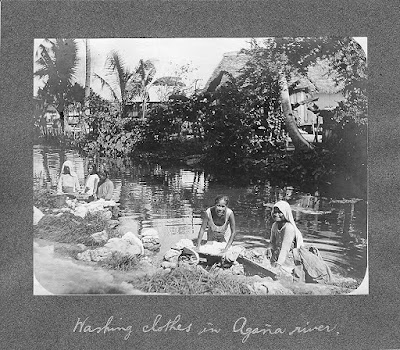 WASHING CLOTHES IN THE HAGÅTÑA RIVER
Thus, no drinking from it!

The more common way to get drinking water was from wells dug right in your own back yard in Hagåtña. The soil in Hagåtña is made of coral limestone. The rain falls onto this ground and percolates downward till it hits a solid slab of rock and stays there. The problem with well water, though, was that it collected a lot of residue, such as the coral rock but also animal feces, as animals defecated on the same soil. People in the city kept animals around and even underneath their homes. The American Naval Government would in time clamp down on this, issuing regulations but not ridding the city entirely of animals. It couldn't. People depended on the animals for transportation and food.

But due to the brackish quality of the well water, and the animal waste, people often got sick from it. In time, the Naval Government had water piped in from cleaner sources outside the city.
Posted by paleric at 12:13 PM