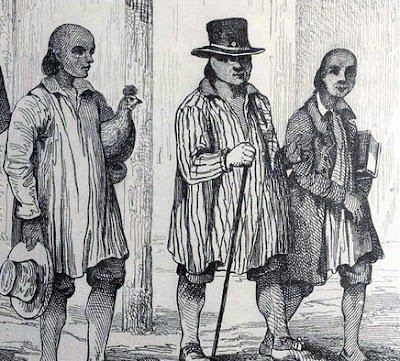 
From a list of Chamorro government officials in the 1830s, we see the names of the officials for the barrio or district of Aniguak :

IGNACIO SOYOÑA - he was the Gobernadorcillo, meaning "little governor" who acted like a town mayor.

PEDRO TAITAGUE - he was the Teniente, or second-in-command.

DIEGO TAITAGUE - he was the Agricultural Officer, or Juez de Palmas, Sementeras y Animales (Judge of Palms, Fields and Animals).

The neighborhood leaders, or Cabezas de Barangay, were :

Every single Aniguak official has an indigenous Chamorro surname, not a Spanish (Cruz, Santos, Pérez) nor Filipino (Pangelinan, Manibusan) surname. The Hispanic and Filipino settlers lived mainly in the city proper of Hagåtña. The outlying villages of Hagåtña (Aniguak, Mongmong, Sinajaña and others) were almost entirely populated by the more indigenous, less mixed-blood Chamorros.

SOYOÑA more than likely comes from the word sohyo, which means "to encourage, persuade, influence" and the like. Many indigenous names end with the suffix -ña (Mangloña, Megofña, Laguaña) and could mean either "his/her/its" or "more than someone else." Or adding -ña to a word could have a meaning no one knows anymore!

TAITAGUE more than likely comes from the word tahgue, which means "to replace, to take the place of, to succeed someone." Tai means "without." Taitague could mean "lacking a replacement, someone to replace him or her." Many indigenous names begin with the prefix tai (Taitano, Taimanglo, Taitingfong).

MATERNE is sometimes spelled Matednge and gives us a clue as to its meaning. Totnge means "to light a fire" or "to feed a fire." Matetnge (Materne) could mean "was inflamed" or "ignited."
Posted by paleric at 9:42 AM